Shayn Roby’s Take: Lyn Leahz hits the nail on the head. The system of checks and balances established by our constitution are perverted when executive fiat is allowed to prevail. In effect, a dictatorship of sorts is created.

“Of all the troubling aspects of the Obama presidency, none is more dangerous than the President’s persistent pattern of lawlessness, his willingness to disregard the written law and instead enforce his own policies via executive fiat…the President’s taste for unilateral action to circumvent Congress should concern every citizen, regardless of party or ideology.” Senator Ted Cruz in The Wall Street Journal

Americans will soon have little recourse against a government bent on controlling every aspect of their lives, and the way our country is headed freedom will be on the endangered species list.

With the passage of the NDAA our government is operating with impunity, overriding Posse Comitatus, and allowing the military unchecked power to arrest, detain, interrogate and even assassinate its patriots. Including detaining them indefinitely without cause. We are losing our freedoms by the minute and have arrived at a critical breaking point. America is unrecognizable in this state and…

New Hampshire attorney William Baer discovered that his daughter’s teacher had assigned her to read a pornographic novel. When Mr. Baer went to the Gilford, New Hampshire School Board meeting, and voiced his opinion out of turn, he was promptly escorted out of the room and arrested.  Video of the school board meeting was captured by WMUR-TV 9 in New Hampshire

in which the video shows that Mr. Baer was arrested for a minimal amount of disruption.  Given the vulgarity of the book, and the obvious breach of trust by the school officials, it would appear that the arrest of William Baer is a bit on the tyrannical side.

Shayn Roby’s Take: The reasons behind the tyrannical overreach by the Bureau of Land Management are definitely questionable as multiple liberal politicians have their fingers in the green energy pie. Conservative groups are justified in standing up against this extended arm of the criminal syndicate more commonly known as the Democratic party.

OKLAHOMA CITY  – A land dispute in Nevada  between rancher Cliven Bundy and the federal government began decades ago.

The Bureau of Land Management says Bundy was allowing his cattle to graze illegally which triggered a round-up of about 400 head of cattle last week.

Bundy claims his family’s cattle have grazed on the land since 1870 without interference from the government.

However, the Bureau of Land Management says Bundy hadn’t paid his grazing fees since 1993.

Over time, officials say those fees have amounted to more than $1 million.

As authorities herded the cattle, a standoff was sparked with members of the militia.

Organizers with the Oklahoma Militia say they have members in Nevada who claim Bundy’s cattle were unlawfully herded by the bureau.

The Oklahoma Militia says it is made up of nearly 50,000 volunteers.

Members say they are taking Bundy’s side and fear this…

In this video that was uploaded to the Alex Jones Channel by Infowars.com, Bureau of Land Management Rangers are warning ranchers and protesters that they need to leave or they will be shot. The courageous protesters responded with, “NO, YOU need to leave, IMMEDIATELY. The Bureau members retreated and left. 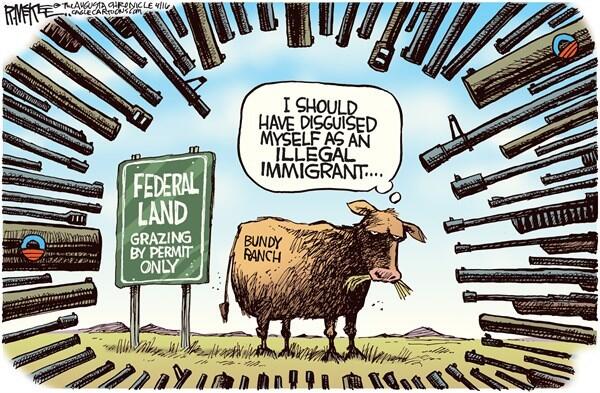 Shayn Roby’s Take: The Bureau of Land Management and Senator Harry Reid are guilty of government overreach and corruption. They backed down when exposed, but do not believe for a minute that these tyrants are afraid of a small band of protesters. We as Americans must continue to stand together against the criminal syndicate more commonly known as the Democratic Party.

Federal government terrorists masquerading as Bureau of Land Management employees left a devastating trail of destruction on Bundy Ranch including the murder of two of Cliven Bundy’s cattle as well as destroying property as shown in the FOX news video below.

Even the FOX news broadcaster correctly calls these BLM terrorists ‘rustlers’ as throughout the nation, a call goes out to disarm the Bureau of Land Management while others call to put them out of business completely by disbanding the rogue agency.

Shayn Roby’s Take: Shamefully, the Obama regime feels it necessary to flex its domestic muscle against someone who raises cows for a living and feeds Americans rather than sending armed men to the border to protect our nation against cartels and the Mexican Army. Of course, with the track record of Barry’s Bureaus of arming Mexican cartels (Fast and Furious) with assault weapons, perhaps it is better that they stay as far away from Mexico as possible.

Nevada rancher Cliven Bundy’s decades-long battle against the federal government over grazing rights has brought to light the Obama Administration’s great land grab. We spend so much time on Obamacare and Benghazi, NSA, and IRS scandals that the area of federal land ownership often goes unnoticed.

Not by Obama, however. This President is out to grab as much land as he can in many cases using the excuse of protecting endangered species as radical environmentalists hold the existence of animals above the existence of human beings. In Nevada they are using the Desert Tortoise as an excuse to seize 900 head of cattle so that the tortoise has more than abundant food and children in the US can have less. Feed the tortoise and starve the children. How nice.